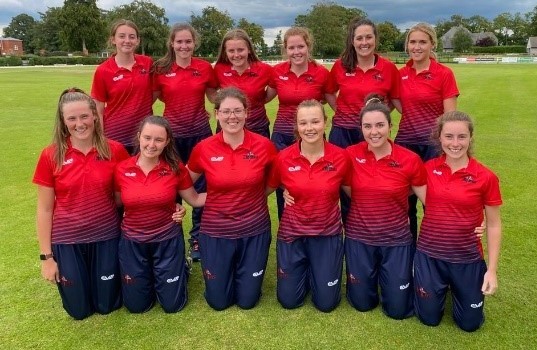 The Northern Cricket Union is delighted to announce their Women’s Performance Groups for the 2023 season.

Our expanded women’s performance programme has been training at Ulster University pre-Christmas with a further 8-week programme due to start in February ahead of an extensive summer training and fixtures programme.

Recently appointed Director of Representative Cricket, Andrew Cowden has commented on the release of the NCU Women’s Performance Squads.

“I would like to congratulate all the players named in the NCU Senior Woman’s winter training squad and I wish them well during the winter months as they all strive to develop their own games and to collectively strengthen us as a union. I’m delighted that 27 players will utilise the performance environment over the winter months.

I would like to thank all the players, coaches and, in particular, Head Coach James Cameron-Dow for their hard work to date during the winter programme. Finally, I’d like to congratulate our Irish players, Amy Hunter and Cara Murray on their recent success during Ireland’s tour to Pakistan. Also, I’d like to congratulate NCU girls Amy Hunter and Abbi Harrison who were named in the Ireland U19 squad for the U19 World Cup in South Africa in January, as well as Aoife Fisher, who was named as a non-travelling reserve.”

As part of our ever-growing programme this winter has now seen an emerging panel who are training with the senior women.

There are also currently five players overseas/university who will join up with the senior group on their return.

Our head coach, James Cameron-Dow, who was recently appointed as Women and Girls Talent and Development Officer, is continuing his work with Amy Hunter (Instonians), Cara Murray (Waringstown / Saintfield), the Irish underage Northern players and The Dragons squad as they continue to prepare for their upcoming World Cup’s in South Africa and the 2023 Super Series.

JCD commented “It’s a busy time for our women and girls, as our programme is now bigger than it has ever been, however, we are still far from where we want to be, and so we’re continuously looking to develop and improve the programme and have a few exciting opportunities that we are looking to explore in the new year.

I think it’s a fantastic time to be involved as both a player and a coach with the opportunities around the Super Series and Irish programmes. I am certainly looking forward to the next few years, and working with a great bunch, while having some extremely talented youngsters coming through.”