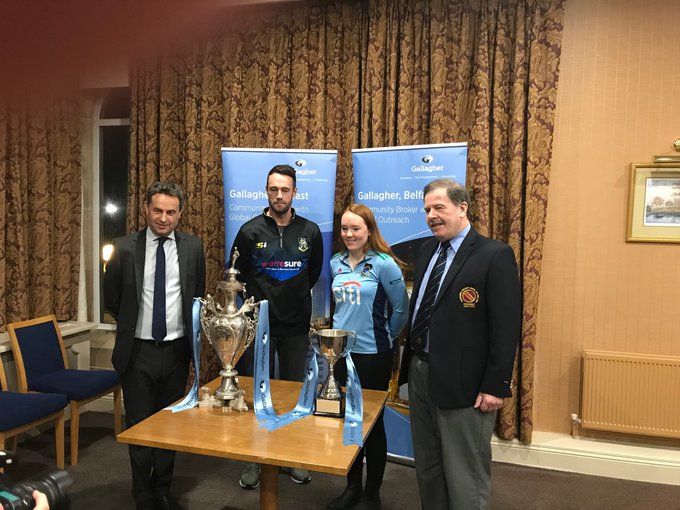 The runs were flowing in the Robinson Services Premier League on Saturday with North Down sitting top as we head into a weekend break due to the Irish Senior and National Cup’s.

Here is everything you need to know from around the grounds:

CIYMS beat Instonians by 152 runs
It was a family affair at Belmont as Ross (101) and Mark Adair (107) both scored centuries to help CIYMS extend their winning league run to four matches.

The duo came together at 73-2 and put on 151 for the third wicket before Ross, who scored his runs from 111 balls with 12 fours and three sixes, was caught off the bowling of Robert Craigan. Mark continued on and reached his century from 82 deliveries, and the platform had been set for a big score with Graham Kennedy (31) and captain Nigel Jones (20) ensuring that no momentum was lost at the end.

Their defence got off to the perfect start as Mark (2-29) struck twice in the first over before Nikolai Smith (26) and Cade Carmichael (41) steadied the ship for Instonians.
Jacob Mulder (5-21) was introduced into the attack and picked up the crucial wicket of Carmichael before collecting the final four of the match as Instonians were bowled out for 163.

CSNI beat Cliftonville Academy by 192 runs
It was a debut to remember for CSNI overseas professional Troy Johnson, who scored 67 before picking up remarkable figures of 7-13 to inspire his side to victory.
After the early departure of Luke Georgeson, Johnson joined Paddy Beverland (71) in the middle and the pair put on a stand of 132 for the second wicket before the latter was trapped lbw by Ben Kane (1-31).

Captain Stuart Thompson (64) arrived at the crease with intent and struck seven boundaries on his way to a half-century while Marc Ellison (30) played a dashing cameo, with his 20-ball stay at the crease producing three maximums.

Matthew Foster (1-9) struck in his first over and when Max Burton (22) was caught off the bowling of Ben Adair (2-16), the Cliftonville Academy wickets began to fall with regularity.
Johnson ran through the rest of the hosts order as they fell to 81 all out inside 36 overs.

They have been dominant in the majority of their victories this season and had early success with the ball as they dismissed both of Carrick’s key men – Jeremy Lawlor (6) and Jacques Snyman (0) – to leave Carrick reeling at 20-3. Ian Parkhill (20), CJ van der Walt (40) and Alex Haggan (38) helped push their side up to 146 all out, and although that total never seemed like enough, it did provide some excitement in the second innings.

The dangerous opening duo of Paul Stirling (11) and Ani Chore (1) were both dismissed by the time the score had reached 12 before Michael Armstrong (4-33) rattled off three quick wickets to reduce North Down to 37-5. That fell to 53-6 but Neil Brand (80*) found a capable partner in Stuart Nelson (26*) who played a superb supporting role to the overseas professional and the duo put on a stand of 95 as they collected what could be a crucial four points come the end of the season.

Waringstown beat Lisburn by 141 runs
Lisburn suffered their first loss of the season as a team effort from Waringstown helped them seal a 141-run win.

The Wallace Park side couldn’t have got off to a better start as Josh Manley (2-38) trapped Adam Dennison lbw off the second ball of the innings and shortly after had Lee Nelson caught behind to leave the hosts on 24-2. Although not at their fluent best, the Waringstown middle order all chipped in with five scoring at least 25, led by Jamie Gibson (43), Graham Hume (34) and Greg Thompson (33*) before a late flurry from Ross Allen (28*).

Gibson (4-17) then played a starring role with the ball, helping reduce Lisburn to 22-5 while Graham Hume (1-5) had picked up the crucial wicket of Faiz Fazal. Lisburn were never able to recover from that precarious position as Allen (2-14) and the returning Gibson finished the job off.

Woodvale beat Cregagh by 97 runs
Ruhan Pretorius (80) was amongst the runs once again at the Cregagh Memorial Recreation Ground as they cruised to victory over their hosts. Harry Warke (30) and James Hall (66) put on an opening partnership of 76 before the latter was joined by Pretorius, who followed up his 97 against CSNI with another big contribution for the Ballygomartin Road outfit.

Pretorius also scored a century for Lancashire side Lowerhouse CC in the Worsley Cup last weekend off 49 balls and would have been eyeing another until he was caught off the bowling of Charlie Shannon (4-49).

Cregagh stuck to their task and reduced Woodvale from 202-2 to 277 all out thanks to Shannon and Danny Cooper (3-32), who has put in a number of impressive performances during a tough campaign. It was a much-improved batting display from the hosts with Craig Boultwood (46*) and captain Aaron Johnston (37) leading the way, but Aditya Adey (4-18) and Ferhan Saeed (3-32) ensured there wouldn’t be a first Cregagh win of the season.