CIYMS will begin their defence of the NCU men’s Gallagher Challenge Cup away to the newly promoted Premiership side Cliftonville Academy.

The cup brings together clubs from the Premiership and the top Senior League and tonight’s (Wednesday) draw produced two other all Premiership ties.  Last year’s runners up North Down will travel to Instonians in what promises to be the top match, and Woodvale will host Carrickfergus.

The draw for the first round involved eight of the 10 Senior League clubs:

The two remaining Senior League clubs Armagh and Derriaghy and first round winners joined the 10 Premiership sides in the draw for the second round:

No dates have yet been fixed for either round.

The women’s Gallagher Challenge Cup is to take on a round robin format to determine the finalists with the six competing clubs divided into two groups. Holders CSNI have been drawn with Lurgan and Waringstown with the other group comprising North Down, Muckamore and Carrickfergus. 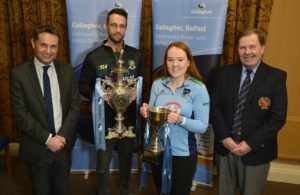